The Sacred and The Profane 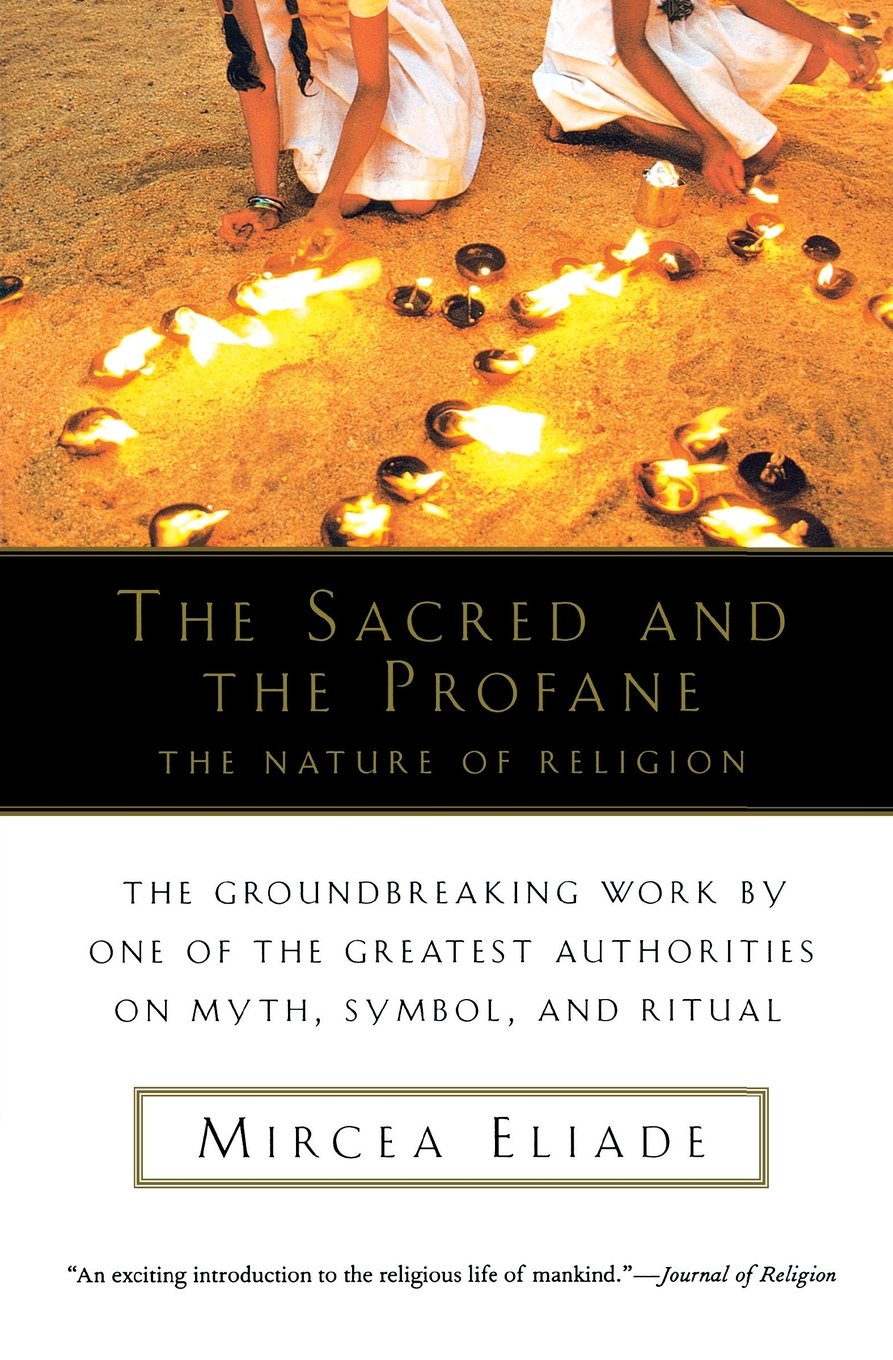 It started with Mr. Otto Heidelmann with a book he has written in 1917 linking the experiences of religion and myth to that of psychological inquiry.

’Heirophony" is a very interesting term that basically means the act of manifesting the sacred. When a stone is considered to be more than just a stone, this is a Heirophony. The idea is that that object would become something completely different while still remaining to be the same object in it’s nature. The Black Rock in Mecca is a Heirophony.

What is sacred is real. Author mentions that tribal people always assumed that the sacred location is a very true and very real situation in which Man can find his purpose and his connection to the vast cosmos.

Religious man feels the need to exist in an organized and total universe, away from the Ganz Andere and closer to the center of the world.

The Achilpa people always carried with them the sacred pole, the axis mundi. The people of Israel think that Jerusalem is at the center of the world. The people of Mesopotamia have their temples named Duranki, which means “The link between Heaven and Earth”.

For religious man, the world could be made sacred by any possible consecration. There was the story of a holy man who founded el-hamel in Algeria. The man lift his stick in the sand and went to sleep in a tent.

Author mentiones that the story of good defeating evil, evil being a force of darkness that threatens to destroy the current order of things as they are and tremble the world in a state of chaos and unknown, is inherent in every civilization. The dragon, or marine monster of chaos, would need to be defeated and from his remaining ashes the world is created is symbolically repeated every year.

The story of Tiamat and Marduk, the story of Yehwah and Rabab are examples of a hero killing the dragon of chaos and shaping the universe from the battle.

Undertaking the Creation of the World

A sacred location requires that it is the center of the individual and/or community’s world: it is the Nexus. When choosing a sacred location, it’s also a primal act of having to undertake the creation of a world. A world that is liable to be attaked, have to be cared for, have to be blessed and sacrifices made to it. It is an archaic form of connection between a person and his reality.

Author gives an example of the people of Israel when God told them to make a sanctuary so that I may dwell amongst you. This sanctuary would be resembling to the Tabernacle in the heavens where God lives.

Why all of these consecrated spaces? Well, the author mentions:

Below are a couple of bible verses to accomodate

Well, author mentions it’s because man is religious in his core. He needs to have an outlet for being: his being. Where he could understand his reality.

Author mentions that time, just as space, can be sacred and breaks homogeneity as well. He also notes that the concept of Sacred time is by its own nature reversible. It is pertaining and repeating of a process or a primordial time where the gods have created the center of the world.

Whereas nonreligious man would find it hard to support such a sacred belief of a period of time. He too still tends to hold some moments in time sacred and would have it repeated: friendship moments, when one falls in love, when one has a great realization, etc.

But such periods lack the primordial reality, repeatability and peer support which makes it realistic: too realistic.

Author makes a very good point that I support: this text relates to the existential behaviours of olden tribes which does have a lot of similarities to us but they nonetheless do not represent modern philosophies and ethical frameworks.

In India, the fire altar the is built every year has 360 bricks, each indicating a specific day of the year.

The idea here is that the world is renewed on annual basis, signified by a circle going from beginning to end and then coming back to its original position where the year is renewed again.

I can relate this to something the author mentioned just as Jordan Peterson mentioned it: Time began when man knew how to tell stories. Nothing before that existed because the concept of time was not established. It was established after man needed to sanctify his space and break homogeneity of time as well, separate it from the mundane and relate it to reality.

The Nawroz, the Persian New Year, commemorates the day that witnessed the cration of the world and man. The king proclaimed: “Here is a new day of a new month of a new year; what time has worn must be renewed”. The idea is that it was believed, not just among the Persians of olden times but among most tribes, that time wears out humans and can cause disharmony. The idea is to ‘reset’ this profane time back into a harmonious existence. This destructive time was in the “past” and it must be abolished in order to reintgrate “today” as a new day that is pure, strong and above all, sacred

For religious man, whatever the myths and symbols say is what really happened ‘ab origine’, in the beginning.

That saying is from an eskimo tribe. It is very much the same for most ardent religious people: it is so because this is what happened. Period.

To summarize, religious man experiences two types of time: sacred and profane. The first is one that allows a person to re-experience and shed himself from the chaotic nature that cannot be repaired, only recreated. The second is ephemeral time that does not enter into the realms of what is ‘Real’.

Reenacting sacred time allows Man to relive the dramatic and interesting times of the heroes of old and experience a sense of wonder and reassurance for times to come. Its an antidote to chaos.

On Intelligence and the Existential Crisis Related to Cyclic Time

It is clear that religious man experiences time, and therefore life, as a cycle that has a favourable beginning and an unfavourable end, but there is always a chance for ‘redemption’ at the beginning of next year through renewal and reenactment of cultural symbols. Later on, a few intelligent people would break-through this system and introduce a new sort of terror that would do them in:

It is true that recognition of infinity means recognition of chaos. Later on, the author talks about Greece and the Platonic ideals. It is true that in Platonic thinking, time is the revolution of celestial objects in the unnamed and unmovable landscape. It follows then that everything that was experienced, all the chaos that occurred, would not be renewed and given a chance for redemption, but the same reality would be made, unmade and remade forever and a day.

This led many further Hellenistic philsophies to be based on acknowledgement, and eventual acceptence, of the framework of the cyclic time. The Stoics for example believe that the universe started, will end, and will start again with the creative and ever-lasting fire of pneuma <https://en.wikipedia.org/wiki/Stoic_physics#Universe>__.

Regeneration through return to the Immo Tembore

For Polynesian tribes, the cosmogonic myth serves as a theraputic device and a counseling tool for biological, psychological and social ailments. At the end of the year, they participate in a ritual called ‘Work of the Gods’ which includes repairing boats and other things. The idea is not that the boat needs repairing, but that the boat is no longer a regular boat but it is one that the gods used and built in the original story. It’s a way to get closer to the gods by repeating what they have done.

Another idea the author touched is:

Profane acts are made by humans. The idea of getting closer to the gods is because the gods can only do the sacred. Their acts represent a complete and absolute sacrality. The ancient tribes understood this and made their festivals and their acts as a way to participate in the drama of the most heroic of the sacred’s moments: the Illo Tempore.

We see here a break in two terms: one observer can say that these olden tribes refuse to take responsibility of their beings so they keep coming back to a better and ancient time when they were glorious. Another observer would say that they are taking immense responsibility, actually the biggest responsibility of recreating the world in the image of how the gods made it originally. This break, in my opinion, can be judged by how close one is to the original stories.

An important point here is that the man did not pray for aid and wisdom, but he became that hero!

This really is not about relating oneself to another person. Those heroes were first of their names and champmions of causes: Mythical. When one relates to them, he reshapes his life and takes on the responsibility that they took. Just like in the new year festivals of Babylonians when they reenact the story of Marduk and the king dresses up as Marduk. He is taking on the responsibility of the king who created the world by defeating a legendary monster.

Now we get to the fun part: the author talks about ‘The Break’

Author mentions that perspective gets shifted completely when the religiousness of the rituals becomes lost. It occurs when the intellectual elites start detaching themselves from the ideas of the the commons. The cyclic time becomes desacrilised.

Author mentions how the Greeks took the idea of the eternal cyclic time to it’s fullest extension.

Before continuing, it is worth asking if the intellectual elites detached themselves from the ideas of the commons and desacrilised the rituals, how has the Greeks made the idea of cyclic time a sacred concept again?

The Sacredness of Nature and Cosmic Religion

Author mentions that nature is by design a sacred entity that inspires awe. Gods are attributed with the attribute of “Most High” since infinite height is a component to inspire transcendence and religious experience.

Gods like the ones for the Andaman Islanders and some tribes in Australia do consider an all-supreme deity who created everything. This actually notes that Hebrew traditions where not the first ones to invent monotheistic religions.

God is above, man is below God is god, man is man Each lives in his own house

That’s a song by the Fang people of the Grasslands in mid-Africa. Those people believed that God, Nzame, created the universe and the people but then he retired and is no longer involving himself with the affairs of humans. The people only summon his aid in the worst case scenarios when a tornado is about to come or something similar.

The author so far has brought up some examples on lunar, stone and tree significance in regards to the religious man.

To understand a religious man, one must understand that these symbols do not, as Hegel said, make one “buried in nature”. It is a symbolism that adds– or sacrilizes – the life of the religious man.

The significance that a man tells his wife that she is earth to his heaven, just like the Indian texts mention, and the significance of the earth-woman when the Koran says “Your women are as fields for you”, and when the Indian texts mention “This woman has come like living soil: sow seed in her, ye men!”. The significance there is that these experiences add to the life of the religious man. Author argues that many of those valorizations can still be seen in our modern life, especially in China and the far east.